Although the Land Rover wasn’t ready, we were still able to enjoy a camping trip to Europe thanks to a hastily arranged car rental through Avis. Here is an account of the trip:

Thursday 5th July – Crossed the English Channel on the car ferry operated by DFDS Seaways from Dover to Dunkirk, departing at 12.00p.m. We then drove south to Montreuil and checked into La Fontaine des Clercs campsite for our first night of camping.

The campsite was well laid-out with spacious plots that can accommodate a large tent and a vehicle. We visited a local grocers shop to stock up on vegetables and eggs, bought some beer from the camp shop and were ready for our first evening.

Friday 6th July – We drove further south towards the town of Herouville St-Clair and experienced the French toll-roads. It seemed like we got hit with toll fees every 30 minutes or so, varying from 2.30 Euros to 7.60 Euros each time! We checked into Les Capucines campsite that was fully booked as it was the official campsite of the Beauregard Festival that we would be attending. Again, we got a spacious plot that accommodated our tent and car and was close to reception and the small shop. We spent the evening at the music festival where we got to see The Kills, one of Michele’s favourite bands. We left the festival about 1.00am and were asleep for 2.00am, only to be awoken by loud, partying teenagers between about 5.00am and 6.00am.

Saturday 7th July – Long queues in the men’s shower block as everyone waited to use the three showers! We left the campsite around 1.00pm and headed to a Carrefour supermarket to stock up on supplies before heading to the town of Bayeux.

We were pleasantly surprised to find that the town was buzzing with activity. An extensive street market offered a wide variety of goods for sale, including artisan products made locally so we spent a fair amount of time walking around the market and the town. Before leaving the town, we visited the Museum of the Bayeux tapestry to see the famous tapestry that depicts William the Conqueror’s invasion of England and the death of King Harold in 1066.

Michele attended the second evening of the Beauregard Festival but got soaked by torrential rain and called me for a ride back to the camp as the shuttle bus wasn’t operating. There were lots of sodden festival-goers all waiting for the bus to begin operations. 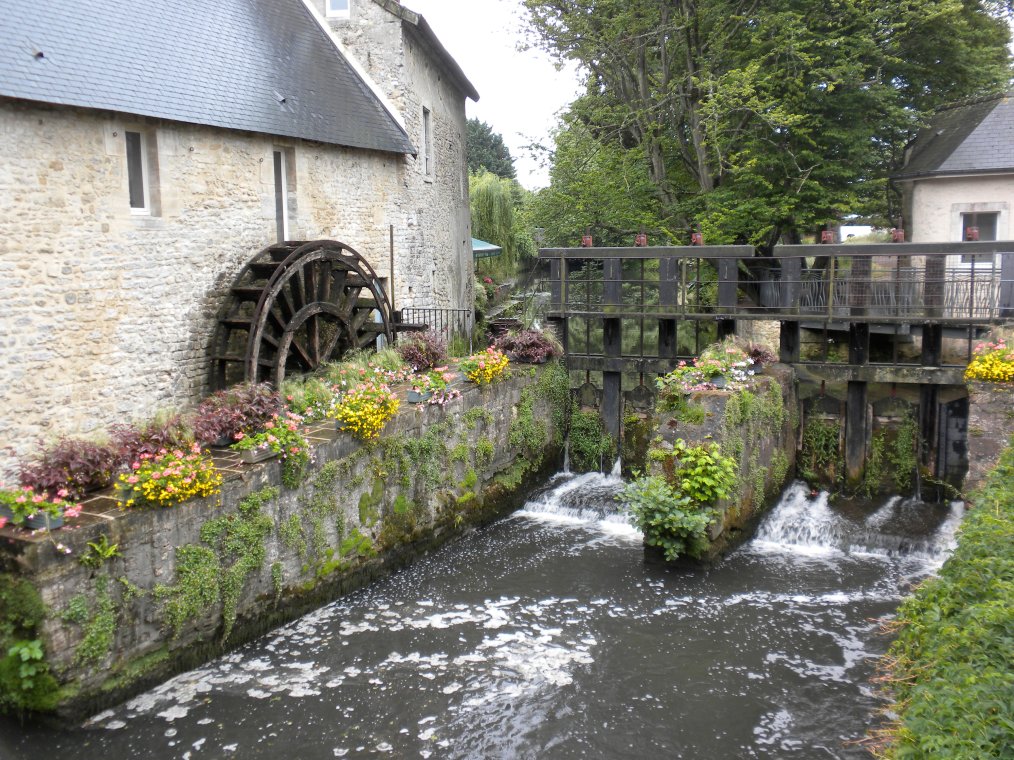 Sunday 8th July – We headed out to do some shopping but discovered that most of the stores were closed on Sundays, so we went to visit some of the nearby historical sites from World War Two.

We visited the Museum of Omaha Beach, Omaha Beach itself and the gun battery at Longues-Sur-Mer. 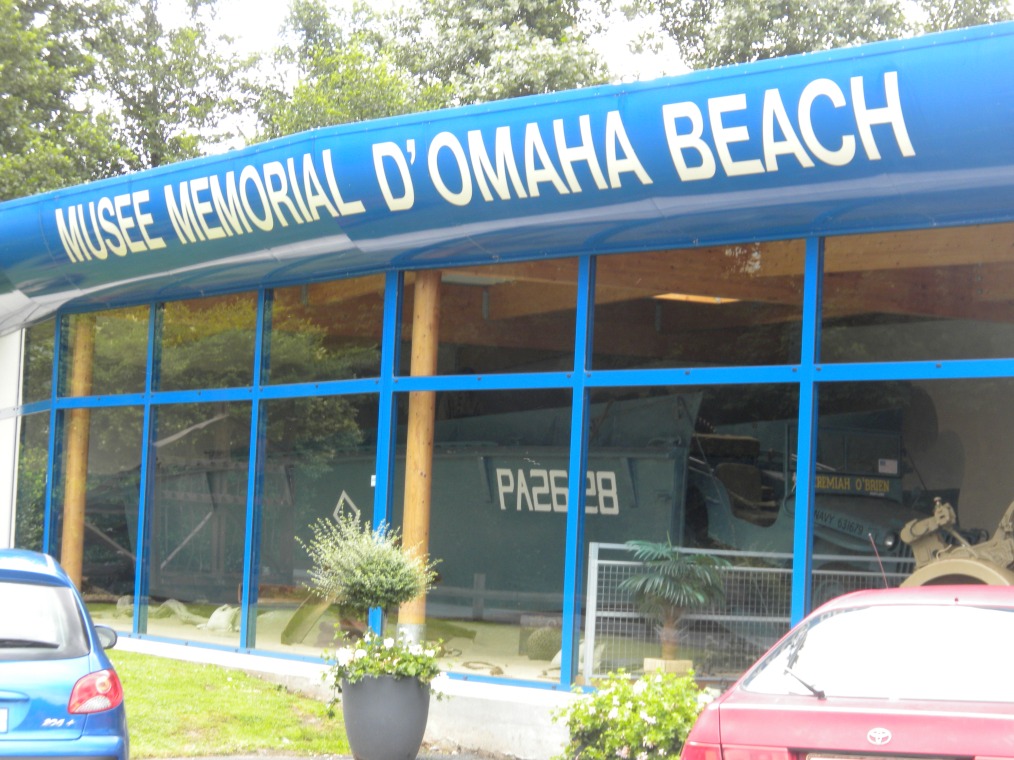 After some sightseeing, we returned to the town of Bayeux and found it was as busy as the previous day with the market in full swing. We ate at one of the town’s restaurants where I ordered a Normande Pizza – andouille sausage, apple, camembert, mushrooms and cream (delicious).

I then visited the Pegasus Bridge that was captured by British commandos in the early hours of D-Day whilst Michele attended the final evening of the music festival.

Monday 9th July – We packed up and left the campsite about 11.15am for the drive to Belgium, arriving at the Gossaimont campsite, near Malmedy, around 6.30pm. We found a nice spacious campsite with nice views and very few campers. We set up the tent and headed into the nearby town of Vielsalm for dinner at a nice restaurant called Contes de Salme.

Tuesday 10th July – we got up around 8.15am and I cooked tomato and onion omelettes for breakfast. We broke camp about 10.30am and headed into Germany. En-route, we decided to stop at Cologne for lunch and a little sightseeing, figuring we had an hour or two to spare.

We ate lunch at a riverside restaurant and then spent some time at the Romano-Germanic Museum before getting back on the road with the GPS indicating an arrival at the campsite at 7.00pm. Unfortunately, we hit some heavy rain and traffic delays so by the time we arrived at the Seecamping Kelbra site near Nordhausen it was 8.15pm. Unfortunately, the camp reception closed at 8.00pm and a barrier prevented vehicle access to the site! It was too late to find anywhere else so we parked in the car-park and I carried the equipment into the site. The campsite is on the banks of a lake so we set up in an open space with the tent looking directly onto the lake.

Wednesday 11th July – in the morning I visited Reception and sorted out the camping fee and obtained the password for the wi-fi internet access. After a leisurely morning, we departed the campsite about 12.15pm and headed for Berlin. We were delayed by traffic congestion as we entered Berlin but we reached our destination about 3.40pm – the home of friends Klaus and Joy in the Prenzlauer District of East Berlin.

Once we got settled, Klaus and Joy gave us a tour of the area, we had something to eat and them Michele and I headed to the Tempodrom for a Patti Smith concert. The concert was excellent and we made our way back on the subway, stopping for a late evening meal at a Chinese restaurant.

Thursday 12th July – this was our only full day in Berlin so we did as much sightseeing as we could using public transportation, guided by Klaus and Joy. Our first stop was the Tacheles art cooperative, where artists have been squatting in an old department store since the fall of the wall in 1989.

Then we made our way around some of the sites of Berlin, including Checkpoint Charlie and the east Side Gallery where a remaining section of the Berlin Wall has been turned into an art gallery.

After the sightseeing we enjoyed a nice dinner at the Pan-Asia restaurant and then headed back to the apartment for a second night with a real bed and a private bathroom!

Friday 13th July – Michele had fallen in love with east Berlin and probably didn’t want to leave but it was time to move on. We departed at 1.00pm and soon hit the traffic congestion. About 5.00pm, we arrived at the Auf der Hude campsite near the town of Celle. It had stopped raining so, after stocking up with supplies at a nearby supermarket, I was able to cook outdoors for a change. I fired up my ‘Bush-Pig’ braai and prepared a gluten-free vegetarian dinner of gluten-free pasta with pesto sauce, peppers, mushrooms and brocolli (plus a steak on the side for me – Michele is the vegetarian).

Saturday 14th July – the sun was only temporary as it was pouring down again by morning! Fortunately, there was a slight break in the rain that allowed us to pack up and prepare for departure. Whilst it wasn’t on the schedule, I discovered that the Bergen-Belsen concentration camp was only 11km from the campsite so we decide to visit there prior to heading for Amsterdam.

Unlike Auswitz, where some of the old buildings still exist, Bergen-Belsen has no remaining buildings. However, footpaths meander through the large complex, connecting multiple mass burial mounds and memorials. We wandered through the quiet grounds in sombre contemplation of the horrors that were perpetrated there. It was a very sad start to the day but I’m glad that we made the visit. 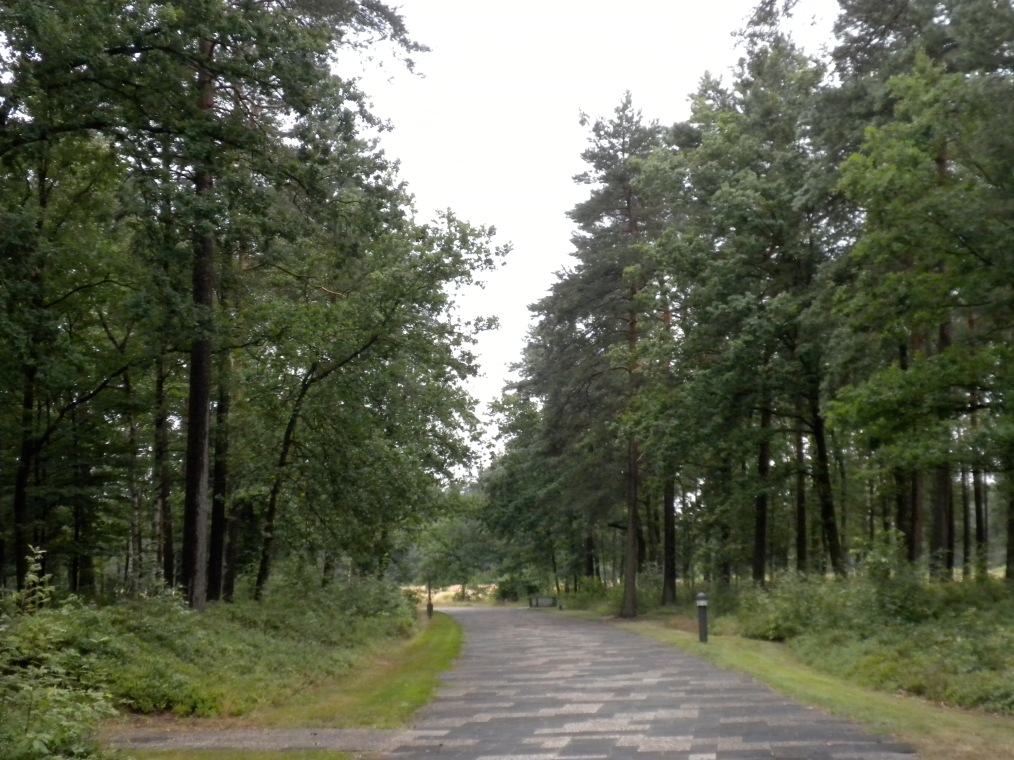 After our visit, we headed to Amsterdam, arriving at the Zeeburg campsite about 5.40pm. We’d booked a ‘camper’ plot for our land Rover and tent but when we arrived with a car we were told that tents cannot be pitched in the camper plots and that we would have to find a space for our tent amongst all of the others. Further, there are no plots with dedicated parking spaces so you have to hope you can find a space to park that is close to an available tent space. We wandered around the facility looking for a suitable tent spot. Most of the ground was water-logged and it seemed like a bog. There was no way we were pitching a tent there! Fortunately, we found one spot on higher (dry) ground that was large enough for our tent and quickly pitched the tent before going back to reception to finish the paperwork. By the time we got back to the tent, someone had pitched a small tent a couple of feet from our front door!

Sunday 15th July – camping so close to everyone resulted in a sleepless night. From 3.00am there were people shouting and talking loudly all around the tent.  After breakfast, we walked to the nearby tram stop and caught the tram into Amsterdam. We wandered around the city, in the rain showers. We also visited Madame Tussaud’s and the Torture Museum. We had a nice dinner at a restaurant called ‘Getto’ and bought some aged Dutch cheese from the ‘Cheese factory’ store. That night, we sat in the tent, cracked a bottle of wine and ate the cheese. Delicious! We went back the next day and bought more cheese to take home.

Monday 16th July – After the lack of sleep on Saturday night we had discussed the possibility of leaving Amsterdam early. However, we both used ear-plugs on Sunday night and enjoyed a full night of sleep! We went back into Amsterdam but got absolutely soaked by torrential rain! More wine and cheese smoothed out the rest of the evening.

Tuesday 17th July – We packed up early and left camp around 10.00am for our drive south to Belgium. We arrived at Blaarmeersen campsite outside Gent at 12.45pm and soon realised that they had also had some very heavy rain over the past few days. Much of the ground was extremely muddy and we had to go back to reception to request a specific plot that was drier than the others. It was a nice, fairly secluded plot that was large enough to park the car next to the tent.

We got set up and then I cooked a lunch of rice and stir-fried vegetables whilst Michele took a nap. After lunch, we caught the bus into Gent to see the Gent Festival activities. The festival stalls took up many of the streets around the town so we spent quite a bit of time walking around. In addition to stalls, there were several stages for live music performances as well as many street performers around the town.

Wednesday 18th July – Today we left Belgium and headed for Dunkirk. Due to the scheduled early morning ferry, we booked into the Lac Hotel in Dunkirk. We enjoyed a real bed and private shower for our last night in mainland Europe.

Thursday 19th July – We were up by 4.00am and left the hotel about 4.40am, arriving at the ferry terminal about 5.05am. We checked in for the 6.00am ferry and had breakfast and a nap onboard. After a two-hour crossing, we drove from Dover to Gatwick Airport where I dropped off Michele to wait for her flight to Bermuda. I drove north to Blackpool to store my camping gear.

It rained almost every day during our trip but the tent and equipment stood up well. It’s a shame that we didn’t get to take the land Rover with us but we still benefitted from the experience of our first camping trip together. I have thoughts of a tour to Morocco for 2013 but nothing will be booked until we know the vehicle will be ready!