On Friday 9th May, we decided to drive the western-most section of the BAM Road, between Tayshet and Vikhorevka (a little south of Bratsk). This section of road runs alongside the Baikal-Amur Mainline (BAM) railway and offers a potential short-cut between these two points, being about 190km, compared to 485km if you drive the main road (see the yellow and red roads on the map below, compared to the hatched line running east from Tayshet). 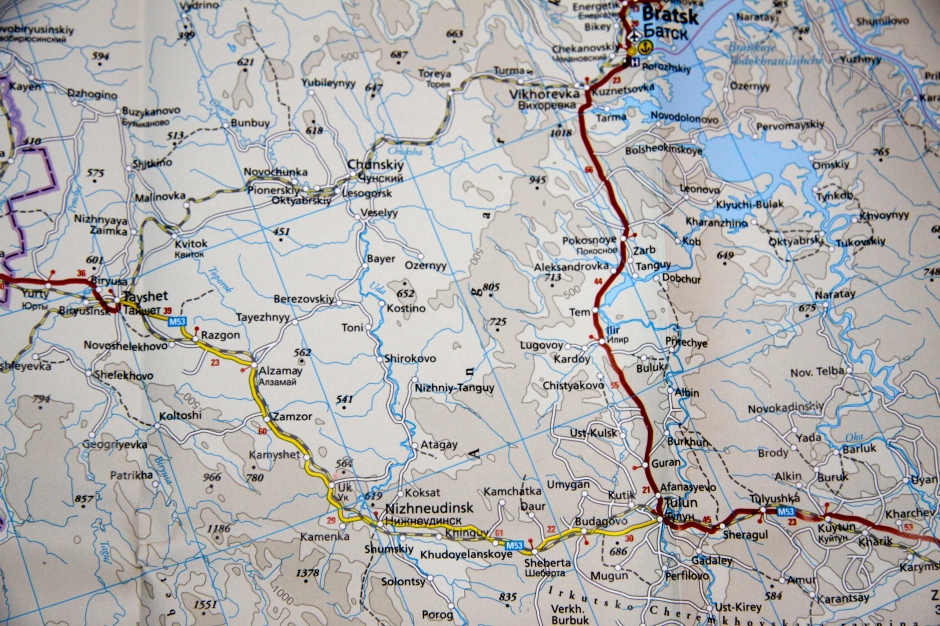 When researching this section of the BAM, I’d been told that it can be ‘extreme’, that I would need a vehicle such as my Defender to do it, and that the shorter distance would still take as much time to drive as the much longer route on the main roads. With that in mind, we set off on the Friday morning with the expectation that it might take us two days to reach Bratsk and that we’d likely camp along the BAM on Friday night

When we began driving the BAM, I was very surprised to find smooth paved road in some places and flat gravel roads in others. In the first hour, we’d already covered 50km. Klaus and I expressed our surprise at the ease of driving and even commented that, at the current pace, we could reach the end of the section by lunch-time. Such a gentle introduction, but it wouldn’t last!

When we reached the town of Chunskiv, we took a wrong turning, thanks to an erroneous entry into the Garmin. The turn took us onto a more sandy road that was still easy to drive and offered pleasant views. After a while, I realised that the route was heading south and that we should be heading east, so we turned around and re-traced our route to Chunskiv, where we again picked up the BAM and resumed the route east.

Back on the BAM, the road was no longer paved or gravelled, and was now flat packed dirt/sand. But it was still easy to drive and we were making good progress. It was still a gentle introduction to the famous BAM Road.

Such a gentle introduction – then we drove around a bend and began to drive downhill. BAM! A great big muddy stretch lay before us, with deep ruts that could leave us grounded if I tried to drive in them, as they were deeper than the ground clearance of my diffs. The muddy patch at the bottom of a hill was very reminiscent of the mud that bogged us down earlier in the trip, resulting in five hours of digging. I was keen not to repeat that experience. This time, we took a more cautious approach.

We got out of the Defender and initially walked the route with my wooden pole to test the depth of the mud. Whilst parts of the track appeared to be quite dry and firm, other areas were very soft mud. The deep ruts were also a concern. I returned to the Defender to get my spade and then spent about 20-30 minutes taking the tops off the deepest ruts and levelling out some of the dubious spots along the route we planned to drive. We carefully examined the various sections to determine the best way through. After some deliberation, we felt that we’d be able to make it through on the driest, firmest part of the mud. But before attempting it, we stopped to eat lunch and give it more thought.

Having tentatively decided that we should give it a go, I began to drive the ‘firm and dry’ section that we had identified. It soon became clear that the ground was not as dry and firm as it seemed once a fully-laden Defender was on it. Within a short period, the ground was giving way and my front wheel slid off a high ridge into a rut. We were not grounded, but it was enough to cause me to re-evaluate, as the muddiest and narrowest section was still to come. And we had no idea what the remaining 70km of the BAM had in store for us.

I decided to allow the BAM to win the day and to retreat to fight another day. I was mindful that we were travelling alone, without the benefit of accompanying vehicles to aid in recovery. We also do not have an electric winch to aid in self-recovery. And even if we got through this section, worse could be waiting around the next bend. Perhaps in a couple of weeks, the sunnier weather will have dried out the mud and it will be easier to cross. It is certainly passable by motorcycles, in its current state.

So, unable to head forward and east, we now had to take a longer, alternate route. One option was to go all the way back to Tayshet on roads of a known condition and then drive the long route on regular roads. But there appeared to be another option, according to the map. We stopped at a mechanics shop along the way to seek local advice. We were able to decipher that the sandy road south from Chunskiv (that we had mistakenly driven earlier) could not take us where we needed to go as there was a water/river barrier due to either a downed bridge or a broken ferry. However, if we drove further west from Chunskiv, towards Lesogorsk, we could take a left turn that would take us all the way to the main road, saving some distance compared to driving back to Tayshet. So that’s the way we decided to go.

But, having wimped out of the BAM Road, the difficult driving wasn’t over with yet. In a similar fashion to the BAM, the alternate route started off mildly with flat gravel roads but, about 60km along the way, we came across another muddy patch, albeit far less extensive that the one on the BAM. After a quick inspection, we decided we could use momentum to get through. With a run-up and in low-third with diff lock on, we blew through the mud and out onto dry land at the other side. We had to engage diff-lock a few more times along the way but, by about 6.00pm, we were close to the end and found a spot in the woods to camp for the night, away from the noise of the highway traffic. We’d tackle the final 7km to the highway the next morning.

The screen shot below shows our track for Friday 9th May. At the top of the image, is the easterly track along the BAM Road. Towards, the top right, we take the erroneous road south and then re-trace our route and continue north-east towards the top-right corner (where we ran into the mud). We then re-trace our route back through Chunskiv and take the alternate route south-west to the main road.