How could we not go? San Sebastian has earned a strong reputation for serving outstanding pintxos (pronounced peen-cho) – a Basque style of small servings of food, similar to tapas. We are currently staying in Hendaye, on the French side of the border, only a 30-minute drive from this Spanish town, so we simply had to go to experience pintxos.

Pintxos are sold in bars, rather than in sit-down restaurants. They are usually laid out along the bar where customers can look at what is available and make their choices. Ask for a plate and then select the pintxos that you’d like. Once you have made your selections, hand the plate back to the man behind the bar who will tell you what you owe. He will also heat up any of your choices that should be served hot. Simple as that.

We concentrated our search for pintxos on San Sebastian’s old town, the historical section of the town where there’s a good selection of pintxo bars. It’s a quaint part of the town, so we enjoyed walking along the narrow lanes between tasting different foods. Rather than going for lunch at a single restaurant, eating pintxos can be something akin to a pub crawl, but instead of drinking beers at every bar, you can sample pintxos at each stop. 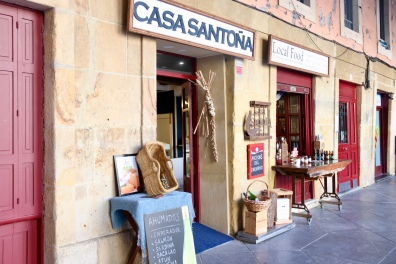 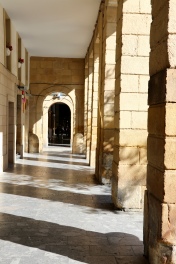 Our first pintxo stop was at Gandarias, a venue that is best known for its aged steaks. There is a sit-down restaurant at the rear where steaks and other meals can be ordered, but most of the action was around the bar, which was fully loaded with pintxos. After perusing the offerings, I selected four items to get me started. 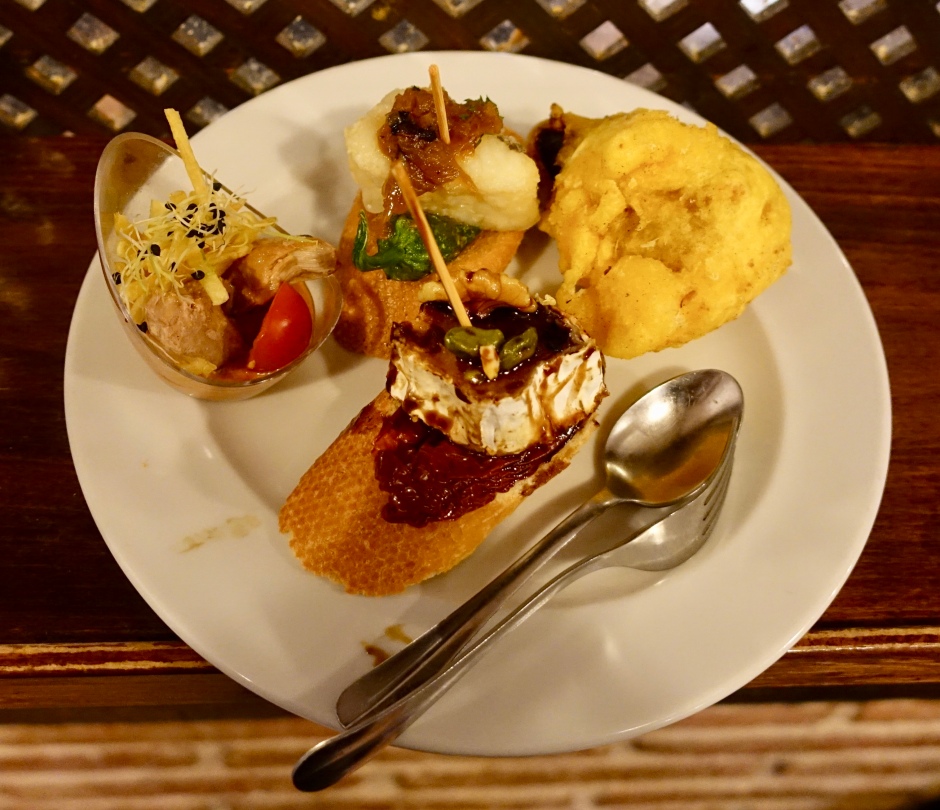 I opted for a ball of king crab inside batter; some camembert-like cheese skewered to a piece of bread; a piece of fish skewered on bread; and a small glass dish containing tuna fish and some dressing. Bev hadn’t found anything that appealed to her at this stage, but there were a variety of choices on display. 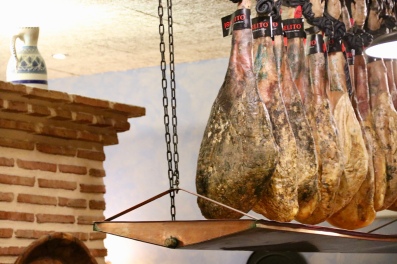 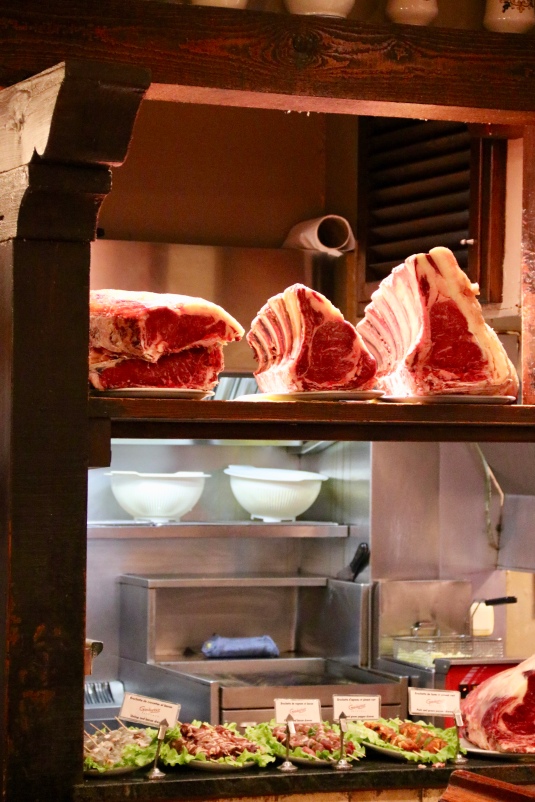 We popped our heads into Bar La Cepa but didn’t stay to sample any of their offerings. 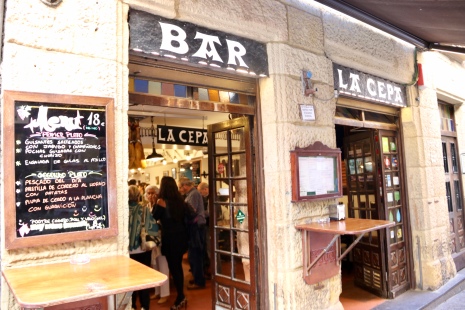 Bardulia had a very nice selection, spread along the entire length of the bar, but the pintxos that caught my attention were the sea urchins. The meat of the urchin was served in a cream, inside the shell. Quite tasty! 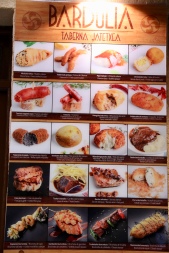 Until now, Bev hadn’t seen anything that appealed to her, but that changed when we got to Bartolo. Again, the bar was fully loaded with platters of pintxos, and many had small signs explaining what each item was (including in English), so that made it a bit easier. Bev picked out a piece of battered Hake fish and some croquettes that contained a variety of fish and seafood. I added a couple of skewers of octopus and some pork belly on bread. All good! 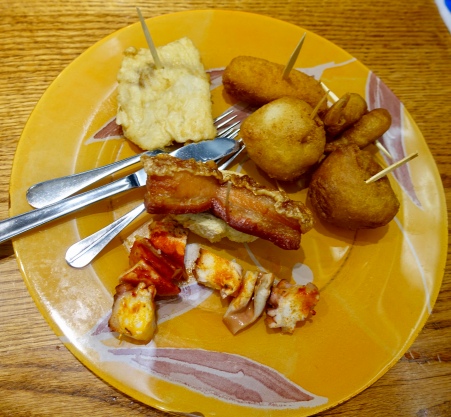 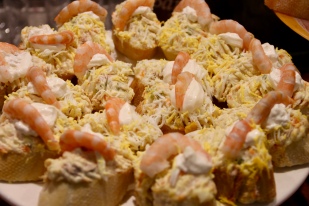 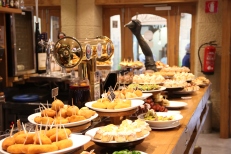 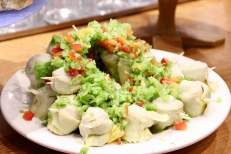 Next, we popped into Paco Bueno. The place was rather empty but it was clear from all of the paper knapkins on the floor that it had been hopping earlier in the afternoon. Paco Bueno is known for its shrimp plates and for squid and shrimp fritters but we didn’t stay to eat anything. 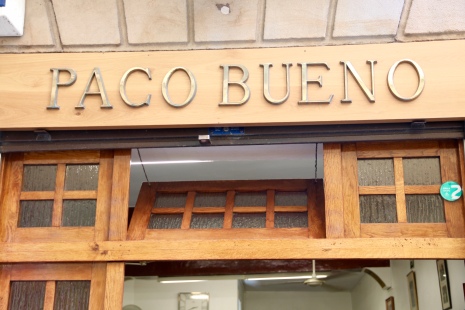 Our final pintxo stop was at Nagusia Lau bar. Another bar lined with tasty morsels but my stomach was already full. All I could do was take a few photos. 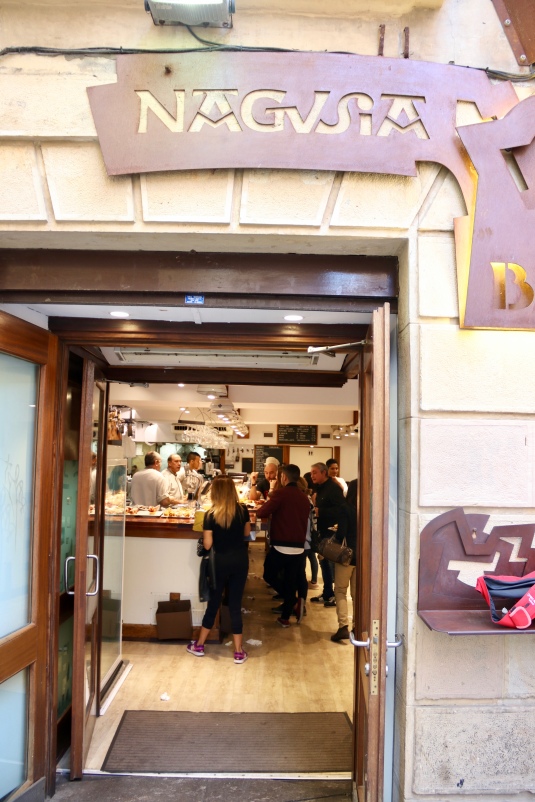 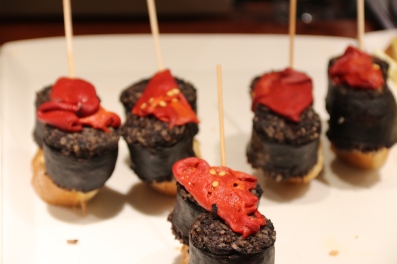 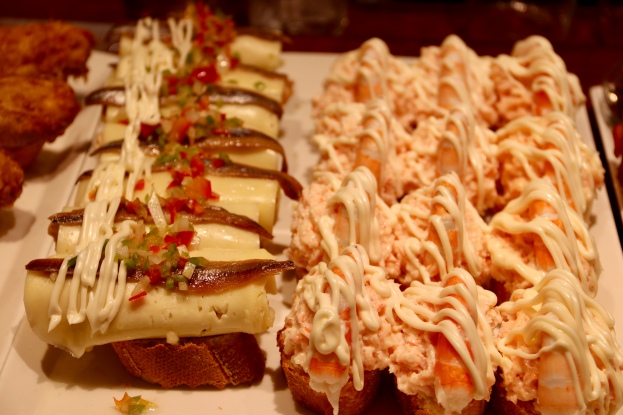 Whilst San Sebastian is deservingly well-known for its pintxos, they are not the only game in town. For example, there’s a beautiful bay with a wide, curving beach and blue ocean, adjacent to the old town. 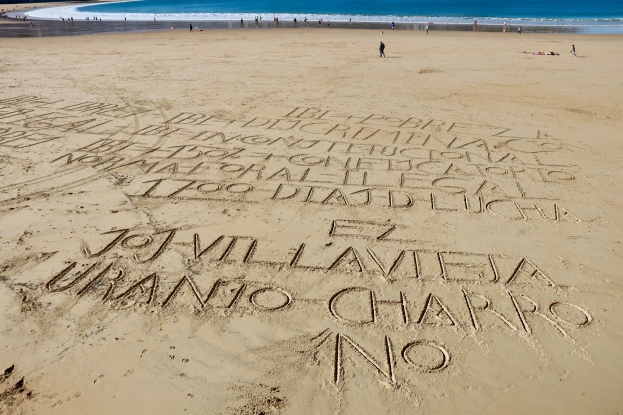 We didn’t wander far from the old town, but we did pay a quick visit to the Neo-Gothic 19th century Catedral del Buen Pastor (Cathedral of the Good Shepherd). The afternoon sun was shining through the stained glass windows, casting multiple colours across the interior of the church, to great effect. 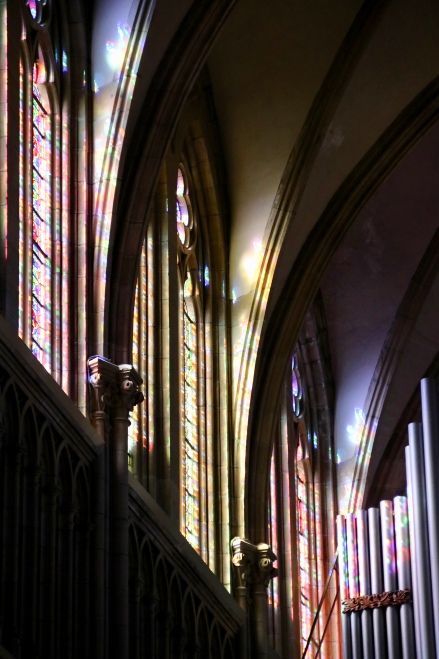 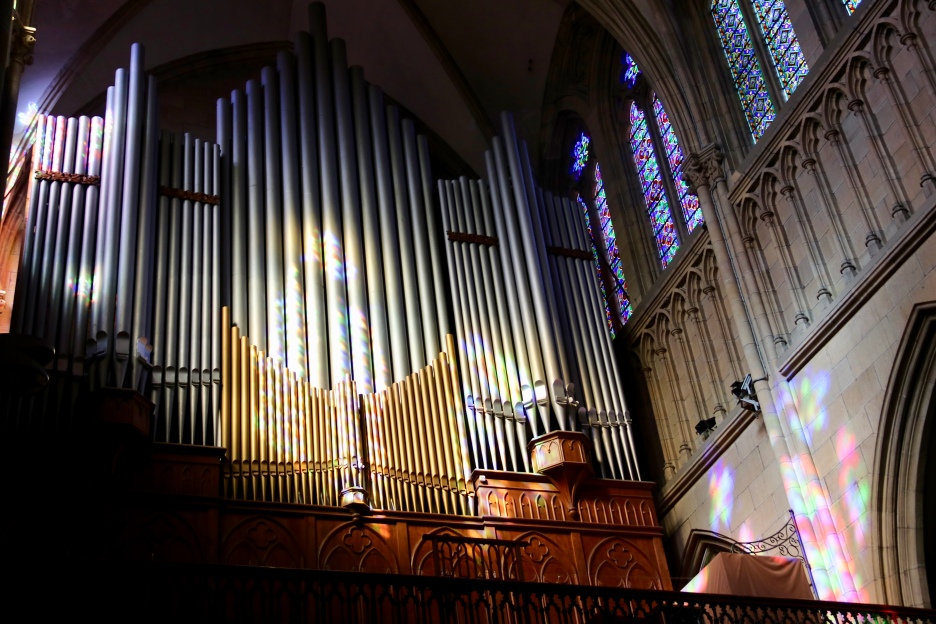 On the way back to Hendaye, we decided to pay a short visit to the small town of Hondarribia, which we can see on the opposite side of the bay from our apartment. It has been called the prettiest town in Basque country.

Here are some photos looking across the narrow entry of the bay towards the French side. 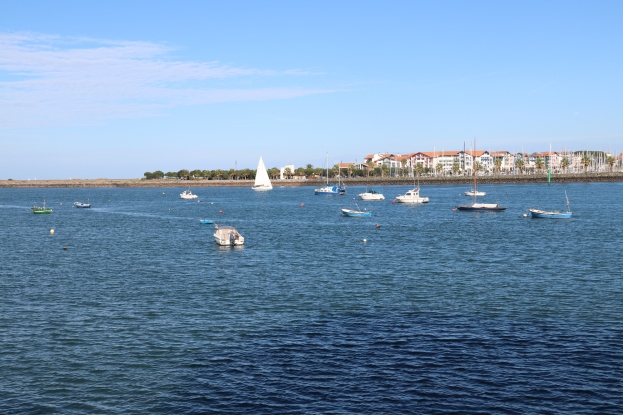 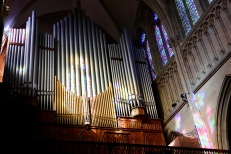 Like San Sebastian, Hondarribia is known for the high quality of its Basque gastronomy. But we weren’t there for the food. We wanted to visit the walled old town. Archeaologists have concluded that people have been living in the vicinity of the old town for 5,000 years. The old town includes a 10th century castle and the medieval wall that surrounds the town dates to the 15th century. When you walk through one of the gates in the wall, you really get the feeling that you’ve stepped back in time. The cobbled streets, the narrow lanes and the tall houses with carved wooden balconies all hark back to a bygone era. The atmosphere is helped by the fact that there are very few vehicles inside the walls. And no tourist shops!

We entered the old town by crossing a high bridge, through an old gate in the wall. An impressive introduction!

Some of the lanes in the old town are so narrow, that I don’t imagine that they get any sunlight during the day. It’s a lovely place to visit. 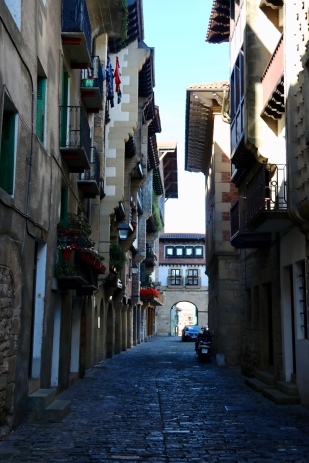 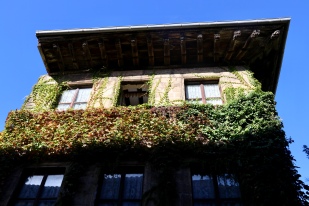 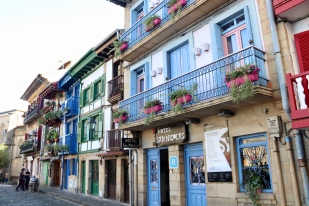 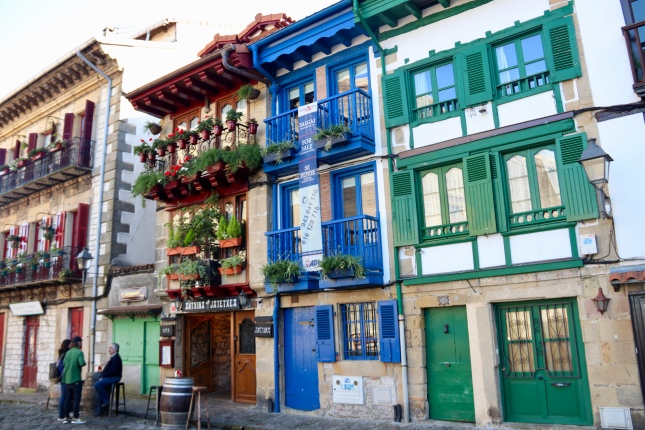 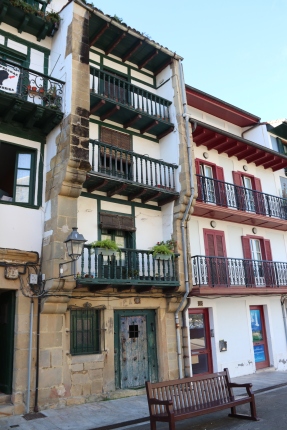 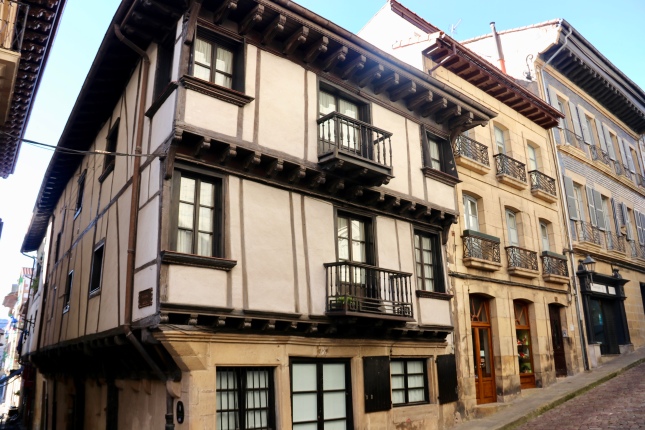 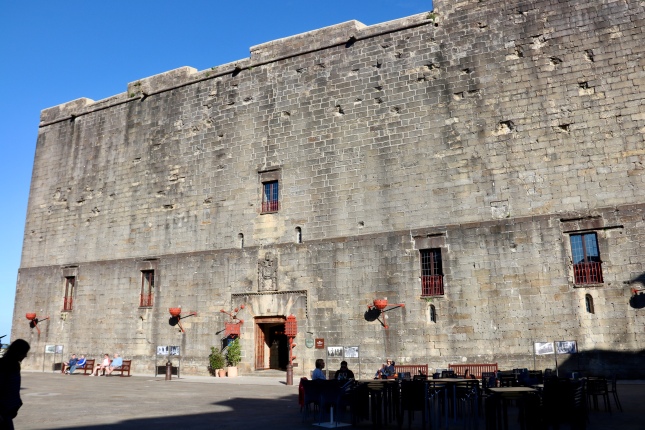 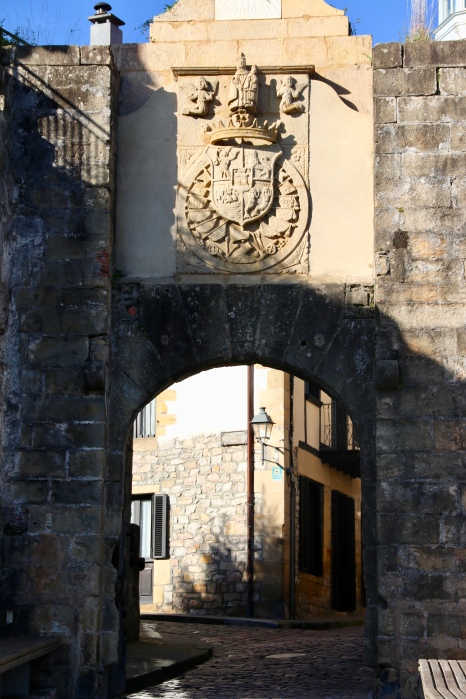 We’ve enjoyed our brief stay in Hendaye, and our forays back into Spain’s Basque country. We wish we’d allocated more time here to do more exploring. However, we have commitments in France, so we must head north tomorrow. Perhaps we’ll return later to do some more exploring – and to eat more pintxos!