One motorcycle is never enough! So, I’ve now added this 2008 Honda CBF600SA to the garage. 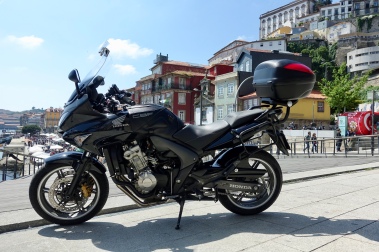 My BMW GS800 Adventure has been working out well for solo rides and for longer trips, and will continue to serve me well in that regard. But it is not particularly well suited for day-trips with a pillion passenger, due to the height and weight of the bike. When Bev told me that she would like to join me on my rides, I decided to find a bike that she’d be more comfortable on.

When I undertook rider training in the UK and subsequently passed my Direct Access Scheme motorcycle test, I did so riding a Honda CBF600. I was impressed with the training school’s CBF and found it to be a very capable bike that was easy to ride. Most of my previous bikes have been Hondas so, when I began to think of buying a second bike, the CBF600 seemed like a good starting point.

It turns out that the CBF600 is a popular bike in Portugal. When I looked online for listings of used bikes, I found 26 CBF600 listed for sale. I narrowed the list down to the fuel-injected model that came out in 2007 and there were still about a dozen listed. I went to look at three bikes at various dealers before I went to see this one – a private sale by an owner who lived near to Lisbon, necessitating a long ride to go see it. Despite being a bit older than I wanted and having fairly high mileage (78,000), it was clear that the bike had been kept in excellent condition. I agreed to buy it and headed home. I returned a few days later, on the train, so that we could finalise the sale and change over the registration into my name. Then I rode the bike home.

Since buying the bike, I’ve made a few adjustments myself. The first task was to buy an additional mount for my TomTom navigator, together with a RAM mount, so that I can transfer the TomTom back and forth between bikes, depending on which one I’m using at the time. I also discovered that whilst the Givi screen is taller than the stock model, it is still not tall enough for a rider of my height. At highway speeds of 120kph, my head was getting buffeted by the wind. I ordered a Givi Shield+ deflector and, now that is attached to the windshield, the buffeting problem has been eliminated. Similarly, whilst the bike was fitted with an after-market Sellerie seat, it wasn’t very comfortable after an hour or more in the saddle. I had an upholsterer insert gel pads into the seat but that hasn’t helped much. So, the most recent adjustment has been to buy a previously-owned Shad seat, in the hope that it provides the desired level of comfort. We now need to do another long ride to assess its comfort. 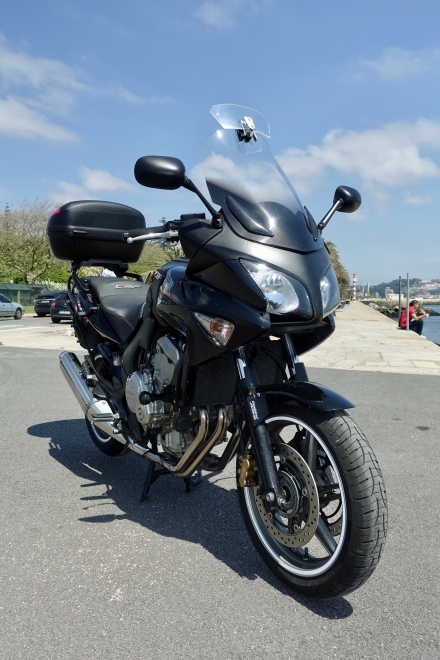 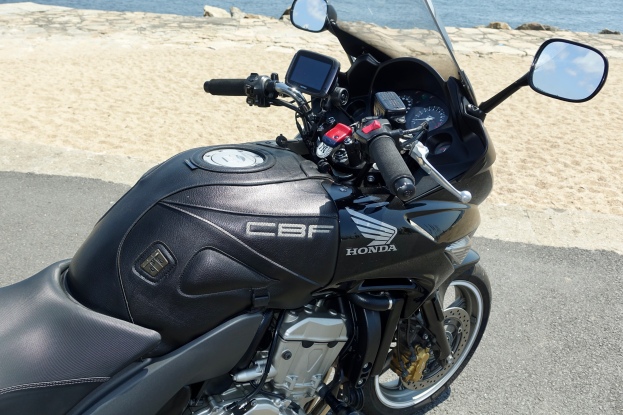 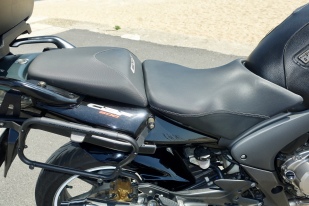 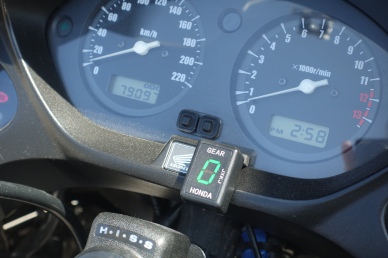 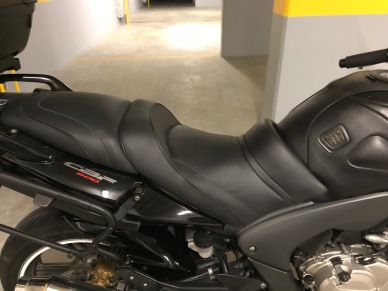 Sellerie seat that has been removed

The bike is already proving to be very capable. It feels much smaller than the GS800, but when the throttle is cranked, she’s got plenty of power to get up and go. Just as I found with the training school bike, it is very easy to handle. I think it is going to make an excellent day-tourer that will provide a lot of fun along the way.