Having the Douro River so close to home, I often take one of my motorcycles out for a ride along its banks, and through the Douro Valley. Often, those rides are a two-hour circuit east along the N108, across the river to Castelo de Paiva and then back on the opposite bank, along the N222. It’s a nice scenic ride that I do frequently. But sometimes, I want to enjoy more of the Douro Valley, so I ride as far as the village of Pinhão. Sunday was such a day. The weather was perfect for a nice, long ride.

In a previous post, I described a ride to Pinhão that utilised the motorway to cover much of the distance, and on that ride I only experienced a fairly short segment of the famed N222, between Régua and Pinhão. But there is a much nicer route, if you have the time, that sticks to N-roads all the way from Porto to Pinhão, and beyond. This is the route that I took on Sunday.

My BMW has been sitting in the garage with little use since January, as I have it listed for sale. But with no buyers yet, I decided that it was time to give the Goldwing a break and to take the 800GS out for a nice run. From my home, I headed down to the Douro River and followed it eastwards, through the centre of Porto. Then, much like my regular shorter circuit, I followed the N108 along the northern bank of the river. It’s a nice stretch of winding road, offering regular views of the river along the way. The lovely weather had brought out lots of bikers, many of whom were on the N108. But when I crossed the Douro towards Castelo de Paiva, the traffic thinned out significantly, with only an occasional car sharing the road with me.

I skirted around Castelo de Paiva, and pushed on eastwards on the N222, towards Cinfaes. But, before reaching Cinfaes, I took a left fork in the road that dropped down to the level of the river and followed the river bank, around an inlet and through Porto Antigo. I continued to follow the N222 as it wound its way through Resende and towards Régua. When it reached the opposite bank from Régua, the N222 clings to the edge of the river and starts the famous 27km stretch to Pinhão that has been called the ‘Best Driving Road in the World’. 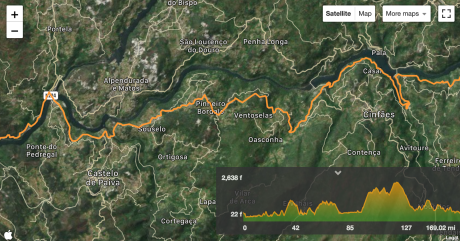 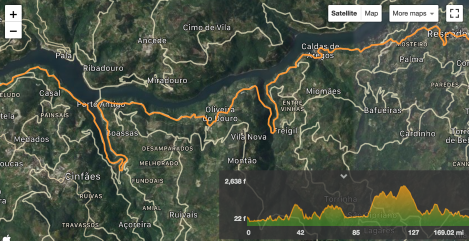 The road offers good views of the river along the way and it is a very scenic route. The N222 passes many vineyards (with bare vines at this time of the year) as well as terraces of olive trees. Some areas have almond trees which were in blossom on Sunday. And there are several small towns and villages along the way. It’s a delightful route that can be enjoyed for its own beauty, regardless of whether there is a destination in mind. 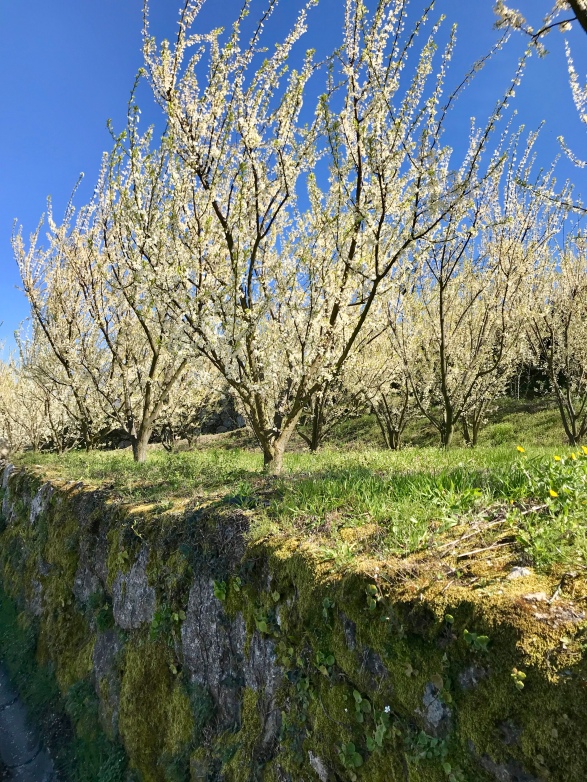 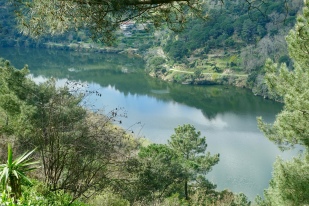 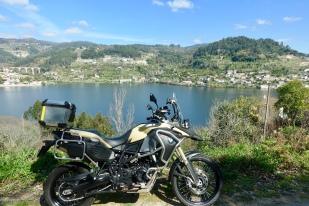 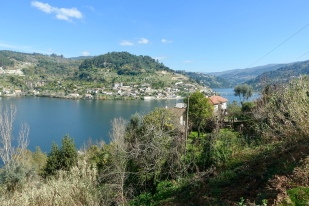 By the time I reached the stretch between Régua and Pinhão, it was about 2.30pm and my stomach was rumbling. I decided to treat myself to a gourmet lunch at DOC – Chef Rui Paula. This fancy restaurant is built on stilts at the edge of the river. You can’t get any closer to the Douro than that. This is a fine-dining establishment and the prices reflect that (it is expensive). But when you want a special treat, this is the place!

I parked the bike and was soon shown to a shaded outdoor table, at the edge of the water. The views were stunning! The menu has some interesting options, with the chef’s own twist on some local specialities. For an appetiser, I selected “egg cooked at low temperature with Portuguese sausage ‘alheira'”. For my main course, I opted for “Bisaro pork neck (cooked for 12 hours at 72C) with apple puree”. Whilst waiting, I enjoyed delicious, oven-fresh bread rolls with olive oil and balsamic. Then came the chef’s free offerings – two fancy little things on decorative platters. Following my appetiser and main course, I declined dessert. But I was treated to a selection of three types of chocolate. All delicious and a very nice way to take a break from my ride. 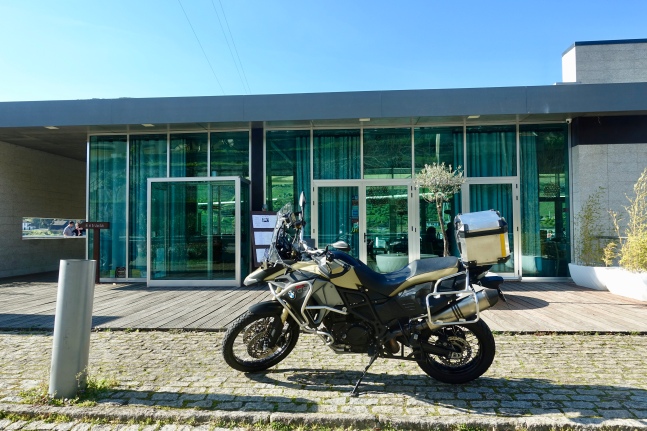 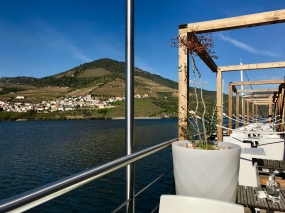 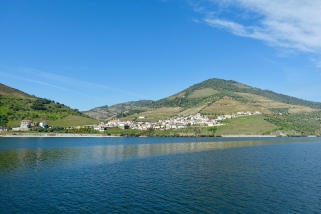 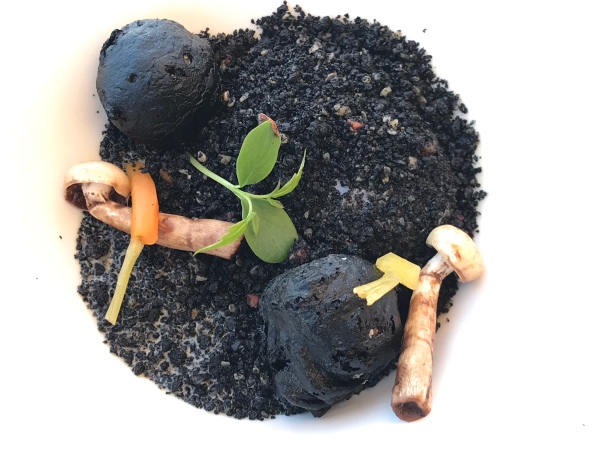 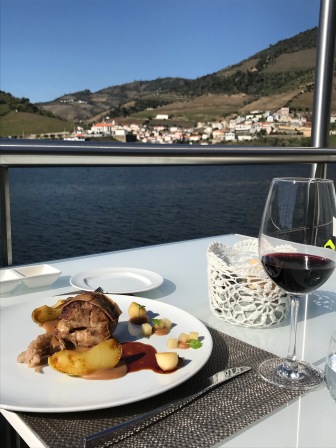 Satiated from my delicious lunch, I rejoined the N222 and headed for Pinhão. I’ve ridden through this small town several times and have admired the tiny railway station as I passed. On this occasion, I decided to stop to that I could better appreciate the azulejo tile-work that decorates the station. Whilst the station was built in the 19th century, the azulejo tiles weren’t added until 1937. There are 24 panels, containing a total of 3,047 tiles by artist J. Oliveira. The panels depict the various stages of port wine production. 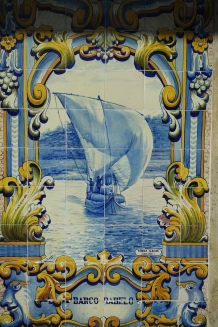 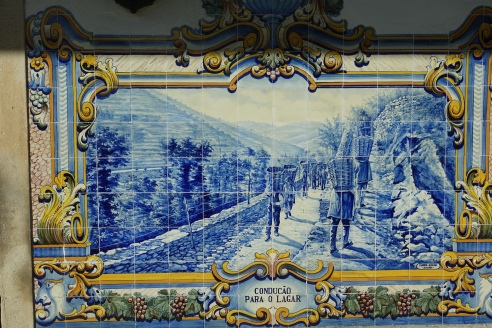 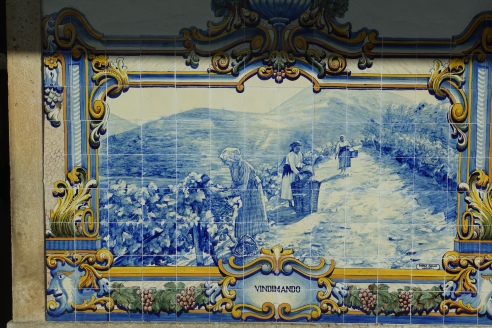 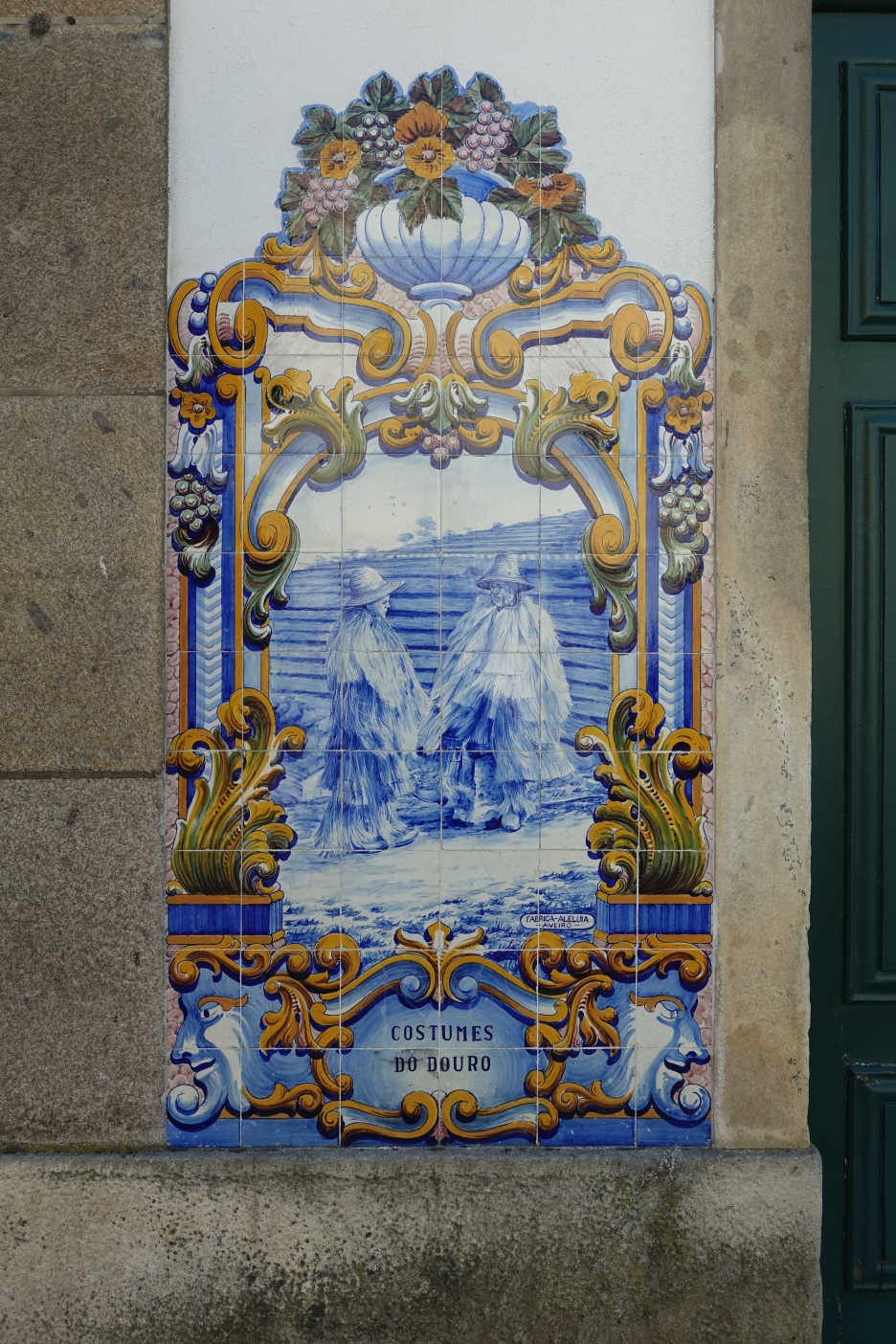 After passing through Pinhão, the N323 climbs up the hill, passing through vineyard after vineyard. This is port-wine country, where the grapes for port are grown. The road provides sweeping views over the terraced hill-sides and down over Pinhão. The road continues to climb until it reaches Sabrosa.

The entire route, back to Porto, covered a total of 169 miles (272km). It included 4 hours and 33 minutes of driving time, but the journey lasted 6 hours and 32 minutes, including stops. Elevation ranged from 22 feet to 2,636 feet (6.7 to 803 metres). A GPS track of the route can be downloaded from Wikiloc using this link.