Those of you who read my previous post about the Goldwing Iberian tour will recall that, once Bev saw other club members with trailers behind their bikes, she decided that we should have one. Well, it didn’t take long to grant her wish.

I contacted Marco, our club president, to let him know that I was in the market for a used trailer and, fortunately, he knew of another member who had one for sale. We arranged a visit to see the trailer and Marco met me there. Having never pulled a trailer behind a motorcycle, I didn’t really know what to expect. And whilst I had ridden my Goldwing to the viewing location, it wasn’t equipped to tow anything. The seller graciously allowed me to take his Goldwing out for a test-ride, with the trailer attached.

I was pleased to discover that the trailer towed well. In fact, whilst riding, I couldn’t tell that a trailer was attached until I looked in the rear-view mirrors. It was completely unobtrusive to the riding experience. The trailer looked to be in good condition so I negotiated a price and agreed to buy it. It was delivered to me the following day. 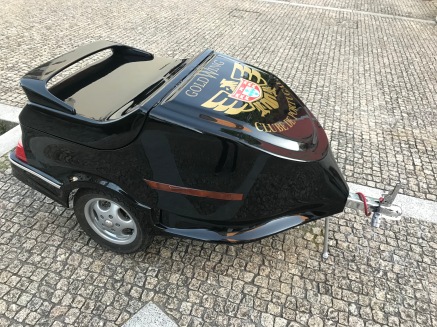 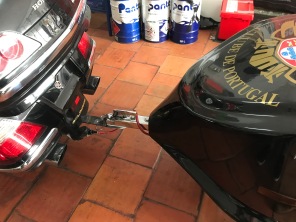 The seller had painted the trailer black to match his bike. I considered having it painted silver to match my bike, but that would likely cost €200 – €300. Once I had the trailer alongside my bike, I concluded that they contrasted nicely, and the trailer already had that lovely big club logo on it. So it is staying black!

A trailer is of no use without a trailer hitch on the bike, so arrangements were made to visit fellow club member Licinio at his Alu-Kit factory in Rio Tinto (a short ride from Porto). Part of his business includes building VIP trailers for bikes and Kit-Trike conversion kits for Goldwings. He also makes towing brackets, hitches and other accessories.

Licinio’s staff member set about the task of installing one of their towing brackets but soon hit a snag. A section of my bike’s sub-frame was rusted in place. Eventually, an angle grinder had to be used to get the problematic part removed, so that it could be replaced by the towing bracket. I was happy with the finished product – and with the price!

Resorting to an angle grinder

Attached to the bike

Of course, the trailer required a licence plate that matched the bike. A visit to Invicta Matriculas got that task sorted. They were able to provide a plate while I waited for just a few euros. But there were still some outstanding tasks to complete.

Whilst the tow-bar had been fitted, my bike still required the electrical work to be done, so that the trailer lights would operate. And the hydraulic ‘lift-assist’ struts on the trailer needed to be replaced, as they no longer had the strength to hold the lid in an open position. Once again, Marco came to my assistance by recommending Camelos, vehicle electrics specialists located in Braga.

An appointment was made and I took my bike and trailer to Camelos. There was a lot of work to be done and I was told to expect a full day of work. Paulo and João welcomed me to the shop and we quickly got the bike and trailer inside.

The trailer already had a universal plug attached to it but that was to be replaced by a smaller and neater plug that is used in professional vehicle electronics. I had also decided to have some LED light strips mounted inside the trailer, along with a small battery. This would improve visibility within the trailer at night, and also provide an interior lighting option when the trailer was disconnected from the bike. There was also the challenge of finding appropriate ‘lift-assist’ struts to replace the current weak ones.

New plug and socket for bike and trailer 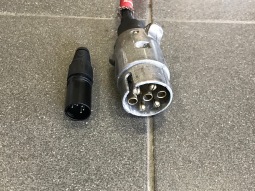 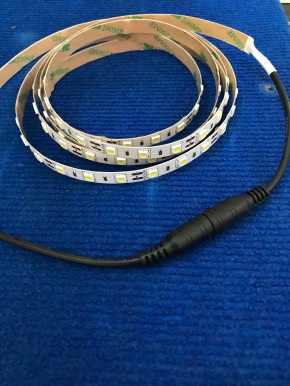 The bike required custom wiring, to connect a new socket to the vehicle wiring loom. The design of the new socket allows it to be installed fairly discretely on the rear mudguard of the bike. Of course, individual wires are required for the lights, both indicators and the stop lights. And the wires connected to the socket must be carefully checked to ensure that they correspond to the wires on the trailer plug. 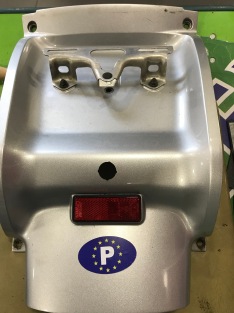 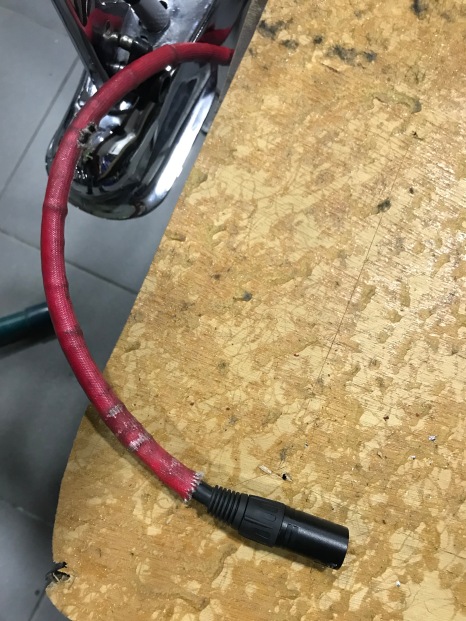 Whilst replacement ‘lift-assist’ struts were locally available, they did not come with the same mounting configuration as the old ones. This meant that some creativity was required in order to mount a new set. Paulo and João suggested that we visit a local scrap yard to obtain a specific type of lift-assist ball-mount that can be found on VW and other brands of cars. Marco and I went to the scrap yard and were able to find a set of the mounts, attached to the hatchback of an old Ford Fiesta. When we got them back to the shop, the size of the threaded side wasn’t a match for the trailer, so João set about re-sizing and re-threading them. With a bit of custom work, he was able to adapt the mounts so that they fit the brackets on the trailer. With the mounts attached, the new ‘lift-assist’ struts could be fitted. The first set turned out to be too strong but a replacement pair worked fine. 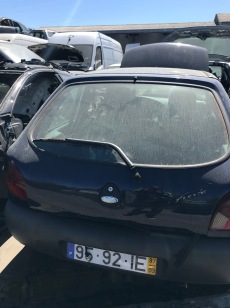 Old Ford Fiesta in the scrapyard

Fitting the LED lights inside the trailer meant that the new battery had to be wired into the loom in such a way that it would only power the LED lights and would have a new on/off switch for those lights. The battery would also need to be charged by the bike when the trailer was connected, but not allow its own power to flow to the bike. Again, this required that all of the wiring be tested and additional custom wiring created. The strip of LED lights was attached around the internal rim, to provide light throughout the entire interior. The result was a neat and tidy installation. 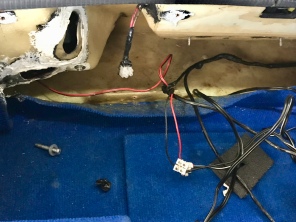 As was suggested, it turned out to be a long day, as Paulo and João take time to ensure that the job is done carefully and professionally. Despite the number of hours put into the bike and trailer, Camelos only charge a job-rate, and not by the hour. I was very happy with their level of service and the final bill.  It was dark by the time I left Braga, but the trailer was brightly lit for the journey. 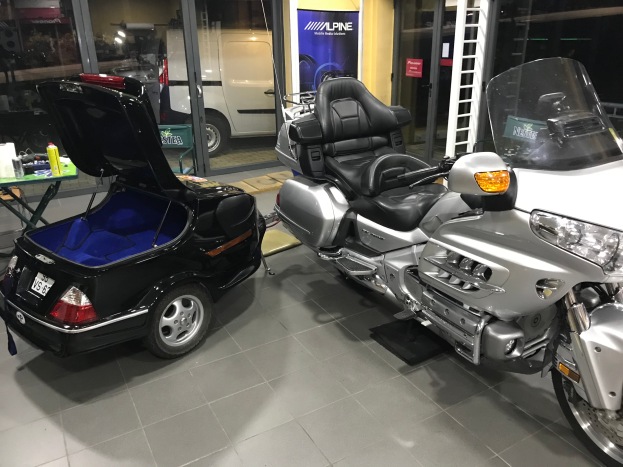 I have to give a special mention to Marco, as he was a great help to me throughout this whole process. He had the right connections and gave up a lot of his own time to help me get the trailer and get the required work completed. Thanks Marco!

With the bike and trailer all sorted, Bev and I are looking forward to our next multi-day ride.

Having initially decided to keep the trailer black, I had second thoughts and decided to fancy it up a bit with a partial silver wrap. Local vehicle wrapper, Tiago Fonseco, came up with some interesting designs for me to consider. Once I’d chosen a design, I dropped it off with Tiago for a few days and this was the result. I’m very happy with the design, which incorporates the Honda wing on both sides as well as a Goldwing emblem at the rear. 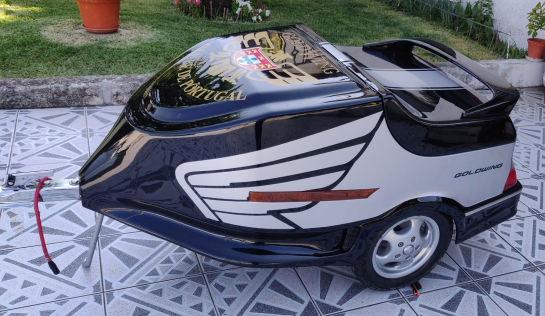 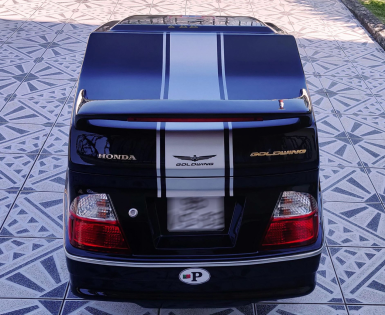 In July 2019, the trailer got its first outing with its new design at the Goldwing Clube de Portugal’s summer event in Braganca. It looks great behind the bike.