We are currently house-sitting in Bouskoura, on the outskirts of Casablanca. Yesterday, after a couple of rainy days, we took a 45-minute taxi-ride to get into Casablanca, for our first taste of the city.

Much of our time was spent strolling around the Old Medina, on our way to and from the Hassan II Mosque. This old section of the city lies within the old city walls, with remnants of 18th century fortifications still visible. The narrow lanes twist and turn in all directions, passing a myriad of small shops and stalls selling a variety of items or offering different services, ranging from vehicle mechanics to furniture manufacturers and hair-dressers. This is a local neighbourhood, with very few tourists to be seen (except at the ‘Chinese Market’ on the perimeter – so-called because of all of the fake Chinese goods on sale). So, a walk through this neighbourhood certainly gives a glimpse into the local culture.

Our first pass through the Old Medina was on a free walking tour with Chakib, a local guide who we booked via Guru Walk (the guide relies on tips). This young man is working several jobs, including conducting these walking tours, whilst also studying Automotive Research and Engineering. It was interesting and useful to have a local guide explain some things to us as we walked through the neighbourhood. His translation skills were particularly useful when we stopped to buy several spices from a local vendor. We spent an hour with Chakib as we passed through the Old Medina and headed towards the Mosque, where we said goodbye.

Following our visit to the mosque, we decided to walk back through the Old Medina, unaccompanied. We found it to be a very safe area. Nobody bothered us, or tried to sell us goods or services – perhaps because the area isn’t frequented by tourists. People just seemed to be going about their daily business. On our return trip through the Medina, we stopped to buy some delicious olives and some dried figs from a small stall. No translation was needed – we managed with a few points, smiles and ‘thumbs up’. 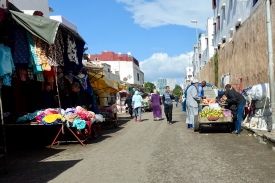 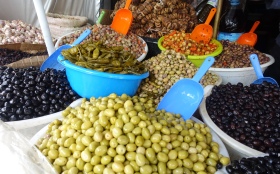 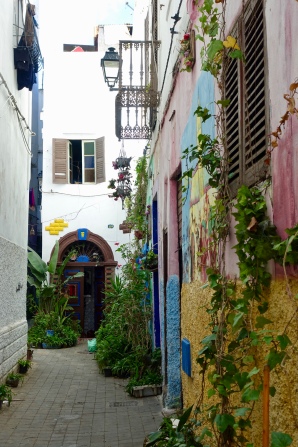 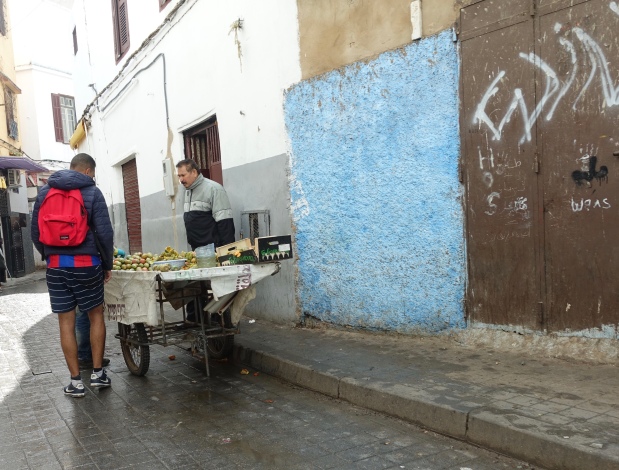 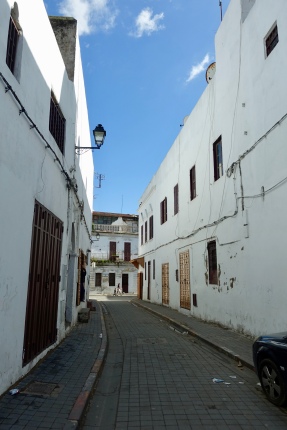 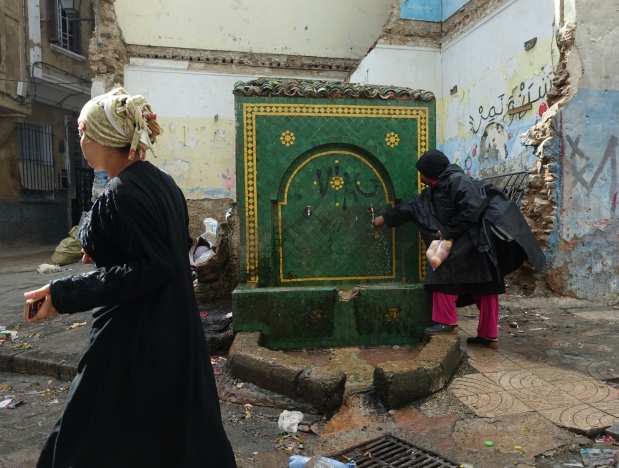 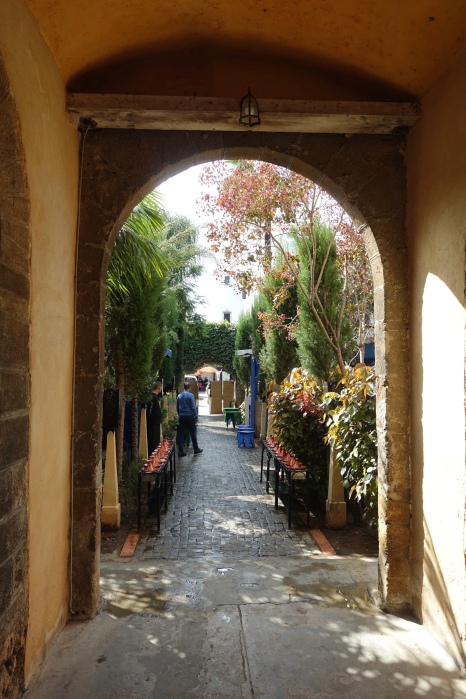 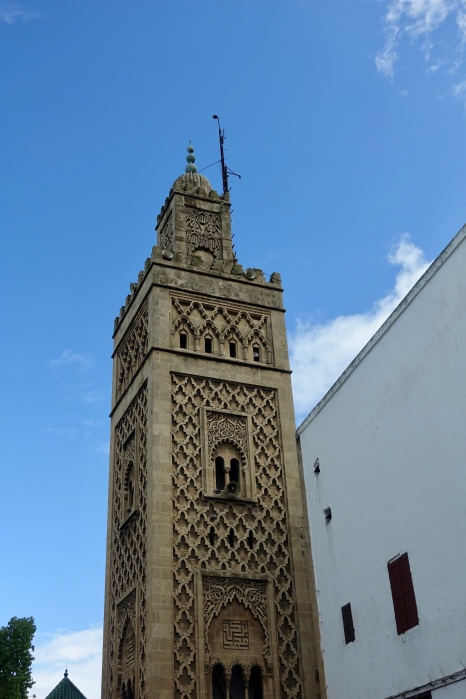 The Hassan II Mosque is probably the most visited site in Casablanca. Reported to be the 5th largest mosque in the world, with the world’s tallest minaret (210 metres), it is a sizeable structure. King Hassan II wanted it to be bigger, second only to the mosque in Mecca, but it seems that the budget wouldn’t permit it. Having only been completed in 1993, it is a modern building. It is said to have cost €800 million to build the mosque, all of which was raised by donations from the public.

We walked around as much of the outside of the mosque as we could, admiring the Islamic/Moroccan architecture. Some renovation works were taking place, so barriers blocked access to some parts of the building. We were aware that guided tours of the interior are possible, but we were unable to determine where to go for the tours. All of the doors were closed and there was no signage to indicate which was the main door, or the tourist entrance. So, we contented ourselves with just looking at the exterior of this majestic edifice. 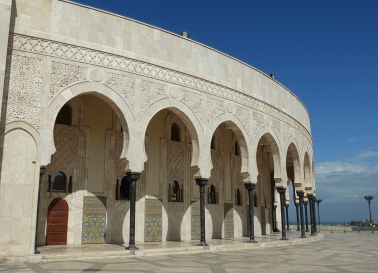 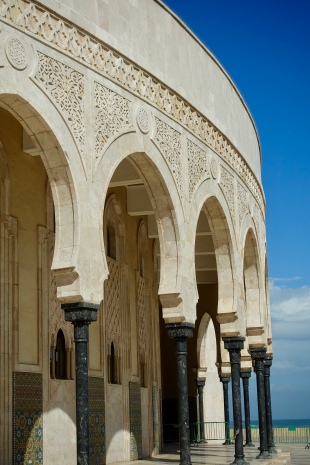 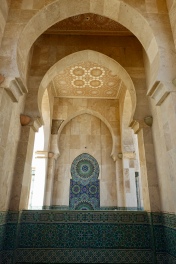 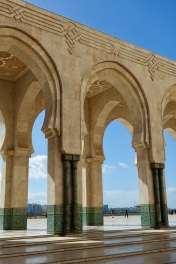 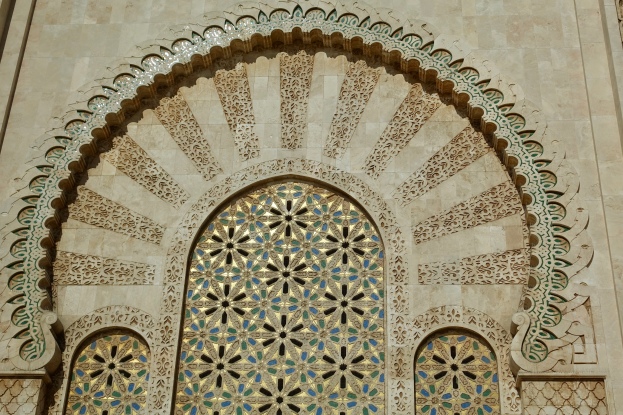 As we left the Old Medina, on our way to the city centre, we encountered this guy in traditional water seller regalia. He asked if we wanted to take photos with him (for a fee, of course). When I asked how much, he showed me a 10 dirham coin (equivalent of about €1). For a low cost, why not? I took three photos and then, when I handed him a 10 dirham coin, he said “No, no. Two Euros” and showed me a €2 coin, which is somewhat similar in appearance to a 10 dirham coin (but double what he initially asked for). I waved him off and ignored his inflated request. When he realised I wasn’t being duped, he shook my hand! All part of the game of scamming tourists, I suppose.

Weather permitting, we hope to get back into Casablanca to see what else it has to offer before our house-sitting assignment ends.